Counting on Leap is a LeapPad game available in Leap 1 including the interactive book and cartridge. It is also available in the LeapPad Pro. It teaches math with numbers from 1 to 10, shapes, time, music, and colors, and tells the tale of Leap helping friends and delivering invitations to a music recital in a big hurry.

Mom has an important errand for Leap, to deliver invitations to a music recital. He was shocked by Tad, who was playing on a scooter, and had to put back the invitations in order 1 through 10.

He visits everyone in Alphaville: Della, who needed help planning her day, Tim, who is doing magic tricks, Casey, along with Lily, playing soccer, Dan, who was making cookies, and Parker, who had a bug collection.

After helping everyone, he almost forgot the job and had to plan a faster way to deliver the invitations.

As he did his job, the audience cheered as all of Leap's friends played the music successfully, which made the recital into one perfect day.

Della goes swimming in the pool at the house, but needs to plan her list.

Time on the Clock

There are stars in colors on the cards. Tim is doing magic with cards in his cape.

Dan is baking cookies with colored shapes on the cookie cutters. The sizes are big and small.

Parker has a bug collection full of jars.

Mrs. Frog and Tad conduct the music with their hands and Leap videotapes the music recital.

A “Roller-Skating Leap” icon is at the bottom of the page to play a game. 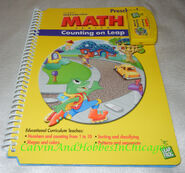