Leap's Big Day is a My First LeapPad book that does not require a cartridge and belongs to the Discovery section of the My First LeapPad library. It has two sides - a story side about Leap trying to retrieve his kite back and the other side with learning activities with Leap, Lily, Tad and the rest of Alphaville.

The narrator of this no-cartridge-book is Christiane Crawford in both the story and the activity sides, while Julie Stevens directs some of the games, mostly the English and Spanish bilingual games in the 2004 re-release and narrates one new line in a new page of the book, as well as narration for the Alphabet Bus page after the Green GO circle is pressed. Morwenna Banks narrates the UK version.

Leap loses his favorite kite while playing outside. It's a daylong chase for our boy frog to catch his silly kite!

He takes many transportation devices - train, sailboat, airplane, hot air balloon, and finally, returning home on a bus in his pursuit.

After he found his kite, all his friends congratulate him and he went home to tell the whole story about it over again to his family.

Play and learn along with Leap, Lily, Tad and their friends in Alphaville as you learn the alphabet, phonics, numbers, counting, shapes, colors, sound recognition, occupational jobs, the body, and music and instruments! Join in the learning fun!

The Activity Side Teaches...

Leap drives his friends Della and Casey on the bus while they learn the alphabet.

If you touch any one of the three characters on the bus, he/she recites a rhyming phrase.

When the pen touches a letter, the female singer (Christiane Crawford) sings about the letter set to the tune of The Farmer In the Dell. The vowels and the consonants C, G and Y have two sounds in the song (e.g. G = "guh" and "juh"); however, most consonants only have one.

Here is an example, using the letter A:

The different animals are:

The piano is a musical keyboard made of paper. It follows the same as the original LeapPad does.

What Will I Be Today?

Leap wants to be various occupations while thinking about the following 3 suggestions in this list.

Parts of the Body

In Casey's own page labeling the parts of the body, the player can play a game to identify body parts with Casey, or make up a twisted rendition of "Head, Shoulders, Knees and Toes" when you touch the music note icon.

Leap, Della, Casey and Dan ride the train - and count and play music in the musical, mathematical train.

Note that this is based off the 2000 toy of the page's same name, except that the girls switch different seats. Della sits on the 2nd seat behind Leap and in front of Casey on 3rd seat, who gets to sit in front of Dan. Also, the numbers 2 and 7 are orange instead of yellow, and the numbers 3 and 8 are in yellow instead of purple.

A lily pad icon is at the bottom of a page to play a game.

A musical note icon is at the bottom of the page to sing a song while playing a game. 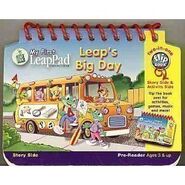