Lil's Loose Tooth is a LeapPad phonics story that tells the tale about how Lil had a loose tooth and Leap and Tad pluck out a plan to make it pop out. It teaches short vowels.

It was in Leap into Learning and A Collection from the LeapPad Library. It also included Tad's Good Night, A Day at Moss Lake, The Day Leap Ate Olives, and Leap's Friends From A to Z.

Jim Marggraff (USA) is the narrator of the story; David Bamber (UK) narrates the British-English version.

This book teaches young readers to pronounce words with short vowels by sounding them out and recognizing whole words in context.

Lil's tooth wiggles and has got loosened. Leap gives a pat, a tap, and a rap. Lil's tooth does tip. Leap sees the gap and he and his younger brother, Tad, hatch a plan to take it off of her mouth.

Leap has the fix that would work: “The egg would splat. The mix would spill. The jet would zip. The jug would drop. The claw will lift your tooth off!” Leap works on his new invention - “The Tooth Plucker”.

Lil might be afraid that she heard Mom calling.

When the invention goes crazy, there was a lot of chaos, but Lil sneezed her tooth out, so it all worked, thanks to the boys and - well, of course - Lil.

When Lil asked Leap to help her with another loose tooth, Leap is happy to help her anytime.

A lily pad icon is at the bottom of the page to play a game. 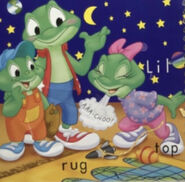 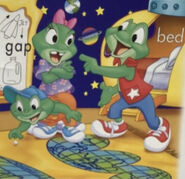 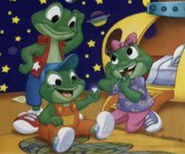