Professor Quigley is a character who runs the factory with Leap, Lily, and Tad. He is educational and smart.

Professor Quigley is an ingenious scientist, whose tail sticks out and getting through his shirt and pants. He has red hair, black snout, and shaved whiskers. His standard uniform is consisted of glasses, a lab coat and an orange tie. He always dresses himself into any outfit he wears, and he looks. It's unknown what animal he's supposed to be

Quigley and Tad in the popcorn room 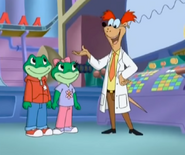 With Leap and Lily 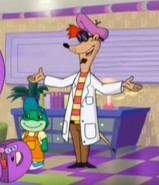 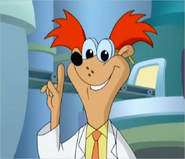